As its larger sibling, The Kiss is based on the same revolutionary and patented Flat-Spider-Cone coincident driver system. This new design is able to produce the Platonic ideal of the entire critical seven octave human vocal range and beyond in a single, phase coherent time plane without any of the normal horn loading and compression present in most conventional designs. Not only does this technical innovation free the sound of virtually all mechanical interference, it also allows for great placement freedom that is normally not experienced nor expected in a reference speaker system.

The physics of this patented driver are an outgrowth of Vienna Acoustics’ longstanding use of reinforced cones designed to maximize strength at nodal multiples while keeping mass to a functional minimum. Flat cones actually do not provide stiffness, but we turned a disadvantage into an advantage by turning to our own patented Spider-Cone technology. This technology not only delivers the best weight – stiffness ratios of any construction, it also allows specific and calculated sound and impulse-response tuning by varying the quantity of ribs, their shape, their thickness, radial or concentric orientation and specified placements within critical positions. The only other construction close is in application is that of sandwich or honeycomb technology that has already proven to be too heavy for our application.

Basis for the cone material is our X3P in a proprietary mix with other materials for the optimum result of stiffness and inner-damping ratio combed with our Spider-Cone light-weight-framing on the cone's rear wall. All cones are then produced by Vienna Acoustics in Austria. By using finite element analysis, Vienna Acoustics’ chief designer Peter Gansterer was able to create a radial-veined structure cast into a flat cone that produces an enormously stiff, flat surface (thereby eliminating time and frequency specific phase shift across the driver surface). This is then combined with a special hand crafted silk dome tweeter using a special neodymium magnet structure placed in its center. 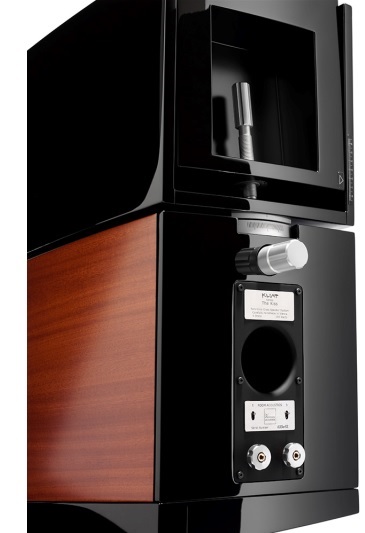 After the careful and time consuming creation of our new Flat-Spider-Cone coincident driver system, an appropriate partnering bass driver designed specifically for the demands of extended bass had to be created. For this process we again turned to both finite – element – analysis along with visiting our own patented Spider-Cone technology. The result is the creation of our entirely new patented 9" ultra rigid NAWI cone. This new driver has extremely low mass while maintaining exceptional stiffness.

By creating such a strong and low mass bass driver, we were then able to take full advantage of not only the highest grade crossover components, but also the purest crossover design employing a new proprietary, modified first order layout. This new crossover combined with our newly designed drivers offers the greatest phase coherency resulting in maintaining the greatest detail as well as offering greatest power and clarity in the lowest octaves. This further manifests itself in creating a reproduction of space that has thus far been absent from pedestal mounted loudspeakers.

The cabinet technology necessary to take advantage of these technical breakthroughs in driver and crossover design required further careful consideration. The separate top-unit enclosure is decoupled from the bass enclosure by a special high-tech, drawn aluminum swivel joint which allows optimum room tuning by enabling not only adjustments for rake, but also for toe-in. The construction of the top unit or Music Center shares the same internal volume and is sealed as is the Music Center of our larger model within the Klimt Series™, The Music.

Mated to this revolutionary driver system is a vented bass cabinet housing our newly developed bass driver. While initially striking, the fully decoupled Music Center allows the entire system to reach the absolute optimum in clarity and naturalness in sound by allowing careful optimization of both the bass cabinet while not compromising the mid and upper frequencies produced by the Music Center.

As always, the speakers' veneer and finish quality is constructed to only the highest standards. The Kiss is available in a true Piano Black Lacquer version as well as a beautiful Sapele natural wood veneer version.