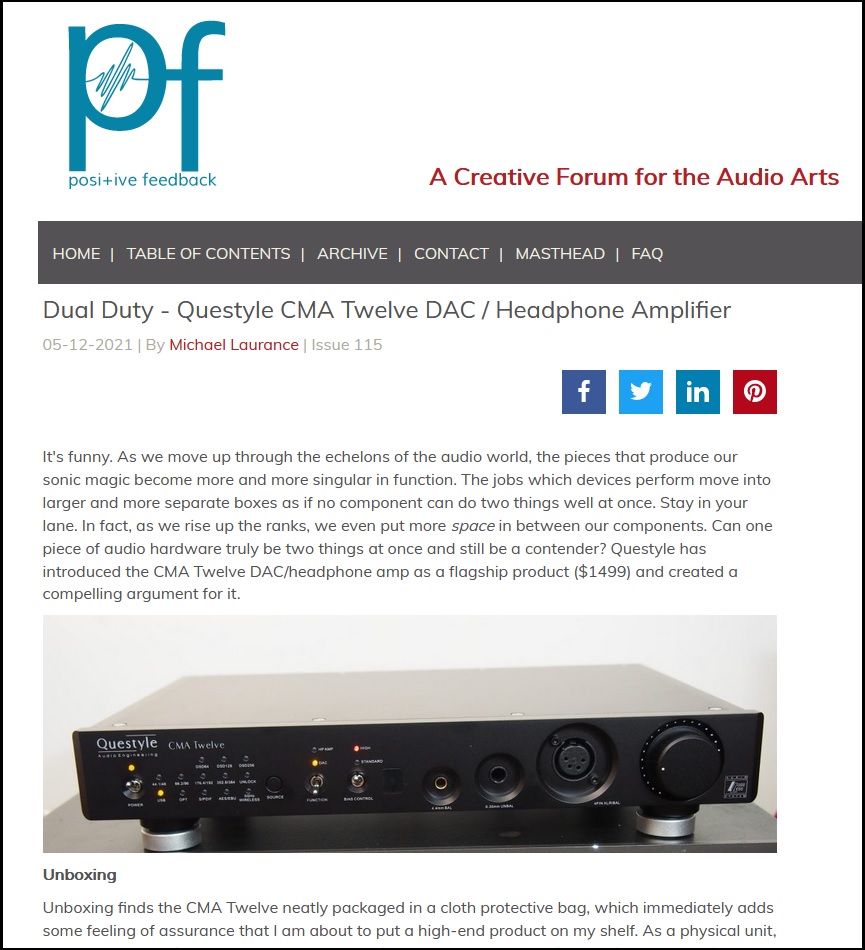 The Questyle CMA Twelve makes an instant and striking statement in my listening system. There is an immediate bounce and sharpness that goes beyond basic dynamics into a sheer liveliness.
I slip in Steven Wilson's Home Invasion. Even with the intro, there is a stark realism right from the get-go. The responsiveness of the CMA Twelve becomes apparent again in the title track, and notes hit my chest with authority. The Questyle DAC has breathed a bit of dragon's breath into my system, and it is rather enjoyable.
Skipping forward to something more expansive, like 'The Creator Has a Mastertape', it's easy to immerse myself into the live experience rather than just analyze what I'm listening to. And that is, after all, the whole point of what we're really going for in our systems, isn't it?
Moving into the realm of hi-res, streaming Qobuz, I first pull up Steely Dan's "Third World Man" (24-bit/96kHz). Here, even more so than with CD, the impact of the CMA Twelve is immediate. The recording has an overall percussiveness and sharpness to it that amplifies the natural groove of the song. The spatiality is immense while simultaneously maintaining a laser focus.
The headphone section of the CMA Twelve outputs a healthy 247mW into 300 ohm unbalanced, and 825mW into 32 ohm balanced headphones, allowing you to drive even the most sensitive cans. There are a couple of bass crashes in "Things Left Unsaid" that I can feel all the way through me, without having to drive the 'phones to ear-splitting levels. In fact, I am only about a quarter up on the volume control.
The performance of the CMA Twelve as a Headphone amp shows itself to be similar to that of which I heard as a DAC. There is impact and immediacy to the music, all while maintaining a remarkable smoothness and musicality overall.
As the single instruments are joined by more, and larger sounds, a chorus of voices, claps, bigger drums, the song never loses focus or gets muddy. I can clearly hear the original banjo through the entire track, no matter how the song crescendos and decrescendos.
The Questyle CMA Twelve excels in its role, doing double-duty as a high-end component, demonstrating itself as a remarkably capable and responsive DAC as well as a powerful headphone amplifier, all for $1499.
Michael Laurance, Positive Feedback, May 2021