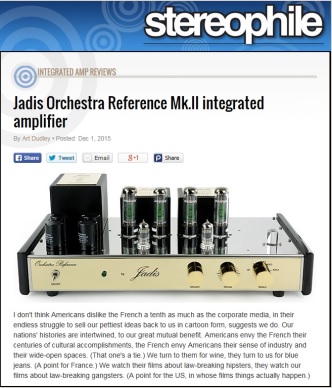 First and foremost, the amp's musical performance was flawless:

The Orchestra Reference Mk II was as beautifully built as the somewhat more expensive Jadis I-35. Apart from three small circuit boards - the amp is hand-wired, point-to-point. The layout is sensible, the wiring and soldering are impeccably done, and the parts quality ranges from very good to superb.

This humblest Jadis integrated sounded a lot like the Jadis I-35. The sounds of both amps were characterized by a full but reasonably explicit bottom, a richly colorful midrange, and a sense of grand spatial scale. The Orchestra Reference made no secret of its dynamic expressiveness. And the steady, stately way in which the Orchestra played the melody and chorale-like harmonies of the Molto adagio was further testament to its superb musical timing.

Carter’s pitch, pacing, and tone were taken to their apparent limits by the Jadis, which rose to the occasion with equal measures of control, weight, and beauty. It was about as perfectly balanced an amp as I ever heard, and did a good job of letting Norman Blake’s crisp/chunky/jangly guitar sound crisp/chunky/jangly. In the extreme.

I was compelled to play “21st Century Schizoid Man” at a mildly excessive volume level. The results were enjoyable, and I was again impressed by the Orchestra Reference’s colorful way with timbres both acoustic and electric.

The amp’s sound was richly colorful and beautifully balanced, with very good musical drive. In the long run, I could live with the Orchestra Reference Mk II quite happily.

For a (mostly) tubed integrated of this performance level to sell for under $5,000 is noteworthy. Rest assured the Jadis Orchestra Reference Mk II is extremely unlikely to disappoint. Strongly recommended.